In this blog I would like to cover a nice utility that is included in Windows 2012 that you can run locally or against remote servers that will show you the savings you would gain by deploying the Windows Server 2012 Deduplication Feature. The file “ddpeval.exe” is located in the windows\system32 directory on any Windows 2012 Server that has the Deduplication Feature installed. Not only can ddpeval.exe be run from Windows Server 2012 but it can also be copied and run from any machine that is running Window 7 or Windows 2008 R2.

To run the tool against a volume on your local server (in this case the E drive), open a command prompt as Administrator and type the following:

To run the tool against a directory located on the E drive on tyour local server open a command prompt as Administrator and type the following:

To run the tool against a directory on a remote server open a command prompt as Administrator and type the following:

In all cases, depending on the size of the directory, the completion time will vary. The output will look similar to what is shown below. As you can see in this example, we would have a savings of 8.94 GBs of data on the”\\servername\e$\directoryname” directory. 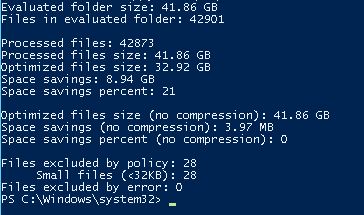 For more options in the ddpeval.exe utility you can simply type the following:

I hope this helps. For information on installing and configuring the deduplication feature in Windows Server 2012 please see my other blog here. As always, if you have any questions or feedback, please leave a comment.

Using PowerShell to Install and Configure Deduplication in Windows Server 2012

BC is a Pipe2text.com contributor and has been an IT Professional for 15 years. He currently works as a Sr. Systems Engineer at a private firm. He enjoys working with Active Directory, Exchange and VMware among other technologies.