As we started building out our infrastructure to allow authentication for 3rd party external apps such as Box.com and Office365 the dependency on ADFS became much greater. The original single server/single site setup that we had built out originally was not enough to support the uptime requirements any longer. So we started by building redundancy into our Primary ADFS site in New Jersey (NJ). This article will guide you thru our implementation.

For details on how to add additional ADFS Proxies to your environment use the following link:

So now our ADFS proxies in the NJ site are HA. See the example below.

Now we had to make the ADFS servers in this site HA. To do this we added a second ADFS server named ADFSNJSrv2 to the NJ site and created a load balancer profile on our F5 systems (VIF-10.10.50.60) that pointed to both private addresses on the 2 ADFS servers (10.10.50.61/62). The internal FQDN we used for this was also adfs.pipe2text.com. All the certificates are the same; we simply exported them from the existing servers and imported them to the new ones.

We changed our internal DNS entry to point to the load balancer address  (VIF-10.10.50.60) instead of ADFSNJSrv1 (10.10.50.61). We then added the following entry to the host files on both the NJ Proxy Servers so they could perform DNS lookups independent of what we configure in internal DNS when we eventually build out the DR site in NY.

For details on how to add additional ADFS Servers to your environment use the following link:

So now our ADFS servers in our NJ site are HA. See the example below. 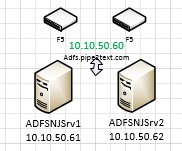 The overall NJ ADFS Infrastructure now looks like the following:

Other ADFS related articles you may be interested in